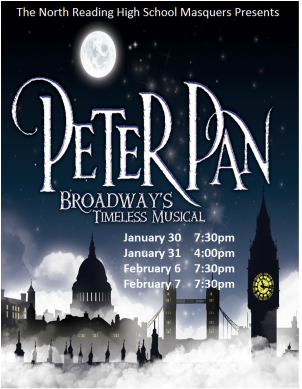 Any student who dresses up like a character from the beloved J.M.Barrie story will receive a free goodie during intermission

Due to continued construction, parking will be tight, so please plan accordingly. Try dropping off you party off at the front door, located off of Oakdale, then turn right onto Sherman Road, and then driving around to park in the main lot. Its a much shorter walk! Additional parking spaces will be made available in the middle school parking lot at the bottom of the hill.

The box office is located outside the Performing Arts Center at the end of the main hall known as “Main Street” in the new high school. Those entering from the main rear parking lot should continue down “Main Street” past the gym and cafeteria to reach the box office.

Run Time is approx 2 hours and 30 mintes including intermission

There will be a raffle for Cowabunga and others- you too can feel the magic of flight as you bounce around!

It is completely appropriate for all ages

There are no strobe lights but there are loud noises (thunder, lightening, yelling) and two pretend shots are fired by Captain Hook's pistol toward the end of the show

Parking will be difficult. Please plan extra time. You may want to consider dropping your party off at the front door (on the side of the school accessed by Oakdale and right at Sherman Road) and then drive around for the main parking lot. The walk is significantly less from the front door as opposed to the side door entrance by the gym (located by the large parking lot). Additional parking is available in the middle school parking lot.

The musical version North Reading is producing is similar to Disney's story line but the songs are different. It is also similar to what NBC produced live this past December but some of the their songs and scenes were written just for the broadcast.

The term “Peter Pan” is in the dictionary.  It is defined as “a boyish or immature man.”

In the Disney movie, the melody for “The Second Star to the Right” was originally written for "Alice in Wonderland."